Official song from the 2018 Redadeg : the results !

And the official song for the 2018 Redadeg is .... Betek an Trec’h by Penn Salsardin with 40% of the votes ! (the competition played out with Hugo and the band Arvest who were in second place, then Jean-Luc Roudaut, Skol Diwan Brest Gwelmeur and Manaig Thepaut ... A big thanks to all for taking part and for the quality of the contributions, they will also be played along the race route !)

So here’s the song that will carry the beat of the runners along the Redadeg route in 2018 : Betek an trec’h : "Towards Victory", like the slogan of Che Guevara », confided the three young singers to the journalist from the Télégramme, recently. The trio is made up of Marine Lavigne, Aude Moalic and Sterenn Le Guillou. The song’s theme : The importance of keeping the Breton Language alive, running to pass the baton of the language. Composed by Brendan De Roeck from the duo Bobby & Sue, this energetic piece, with it’s latin american sounds, regroups a dozen musiciens with several brass instruments. An opportunity to merge Breton with the rhythm of Cuban music. An opportunity to make the Breton language, a vector of sharing and of mixing genres, colours and tones. Get ready to dance the Salsa on the roads!

To hear the other groups again :

Arvest ARVEST has been touring the roads of Brittany and elsewhere, for more than 15 years. Known for their communicative energy, the group combines tradition and modern music.

Manaig Thepaut A pretty gentle voice, a rousing rhythm, with originality: a recipe that has proven itself and that animates the song. 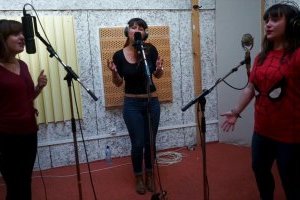