All the songs from the Redadeg

In addition to the official songs you can also listen and listen again to some original creations and the hits of previous years!

Other songs for the 2014 Redadeg

Lipdub filmed in Place de la Mairie, Rennes, Saturday 24th May 2014. Thanks to everyone who took part!

Created by a Redadeg team just for their pleasure...and ours! ;-)

A song written by a band of talented young people, and with a fun video that will take you from the streets of Leon to the Place de la Concorde in Paris.

Run to the tune of the plin danse? Run and danse, danse and run, let’s go! Song sung by Aodren and Tangi.

The bilingual pupils of Douarnenez stood on ceremony to welcome the runners, when the Redadeg reached it’s end...Did you sing with them?

And the Riantec team made a great video..

"PlijaBrezh" by Diwan An Alre

The kids from the Diwan school in Auray chose to sing the song that they wrote for the Redadeg to a traditional Vannetais tune.

Download the song "Daou Don Doub ar Menezioù" : tune of the big Gavotte in the streets of Douarnenez

Did you know that a giant Gavotte (breton dance) led the festival-goers from Rosmeur port to the Place de Béziers on Saturday 19th May in honor of the Redadeg arrival? All musiciens were invited to take part: they practiced a little bit beforehand with this Music score.

Do you remember? Surely you’ve found yourself humming it or singing it at the top of your voice since 2010!

Composed by David ar Gall and his students from the Diwan Vannes secondary school,the song has been covered, electrified and punkified by Les Ramoneurs de Menhirs. And that’s how it became a hit!

The songs from the Redadeg in 2008 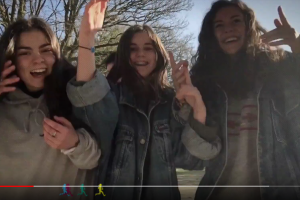 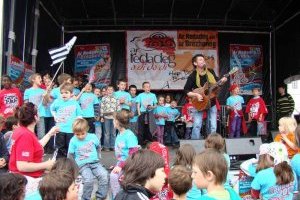 All the songs from the Redadeg