The race was first established in May 2008 under the umbrella of Diwan30, the organising committee for the 30 year anniversary of the network of Diwan school in 2008) Today, « Ar Redadeg a di da di » is an autonomous structure organised under the form of an "association law 1901" since 2008 and is registered with the number W353006925.

The association relies heavily on volonteers, people wishing to actively help with the overall event organisation. 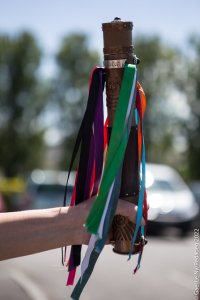 The Redadeg is an event with a strong media (in Brittany and elsewhere), economic (direct and indirect) and cultural, impact.

It crosses Brittany, day and night to symbolise the transmission of a lively, creative and dynamic Breton language, across the generations and territories.

To back the projects in support of the Breton language the kilometres are sold, and the profits are redistributed. These new initiatives are selected based on application, they are very diverse and can relate to teaching, leisure, media, sport or culture, but they all promote the use of Breton in social and family life.

The race goes through the 5 Breton departments over 2000 km and crosses more than 300 municipalities.

The Redadeg defends the idea « Brezhoneg ha plijadur » ! « Breton language and pleasure » ! You can run with your family, friends or colleagues, in disguise, with music, follow the race on foot, or on rollerblades, in pushchairs or on bikes....organise some entertainment or take advantage of the local festivities, concerts, theatre, stands, breakfasts....organised according to the time and place of the race passing. The main idea is to take part, to be seen, to have fun and it’s also the opportunity to hear, to use and to make Breton be heard!

The baton, symbol of the Breton language, carries a secret message, it is passed from hand to hand and is read at the finishing line.

The Redadeg is an all-round event, accessible to all, with a spirit of solidarity, sportsmanship, culture and festivity. Yes, yes! All that at once... and is also very media-friendly, has a strong impact on the local economy and culture.